We’re two episodes into Game of Thrones’ final season, and it feels like we just watched the remaining characters have one last hurrah before everything comes spiraling down. There were no deaths this episode! Not one person died! And while that’s great for the citizens of Winterfell, it’s not exactly helping any Game of Game of Thronesplayers.

Fortunately, despite all of the violence that didn’t happen in this episode, there were plenty of funny and brutal one-liners to go around. There was also some sex. And some drinking. It was kind of like Game of Thrones Animal House moment, right down to everyone’s uncertainty about their futures.

This episode opens with the brief trial of my future betrothed, Jaime Lannister. He’s looking incredibly dashing. It’s wild just how well he wears unbathed. Sadly, I’m the only one who thinks so. Daenerys isn’t happy to see him — but why should she be?

Here’s the man responsible for her entire family’s plight. She wastes no time berating him, either, scolding Jaime and Cersei for not holding up their end of the bargain. “I don’t see an army. I see one man — with one hand.” Daenerys has hated the Lannisters for years, thriving on her raging ambitions to overthrow their family. Not even Tyrion, her most loyal Hand, can convince her otherwise. He tries to insist that he knows Jaime and can vouch for him, but Daenerys wastes no time in cutting him down with a simple, “Just like you knew your sister?”

Even Bran, Winterfell’s local sociopath, manages to get a jab in at Jaime. As the most handsome Lannister tries to defend his actions from the show’s first season when his family essentially tore through Winterfell, Bran not-so-subtly calls out, “The things we do for love.” 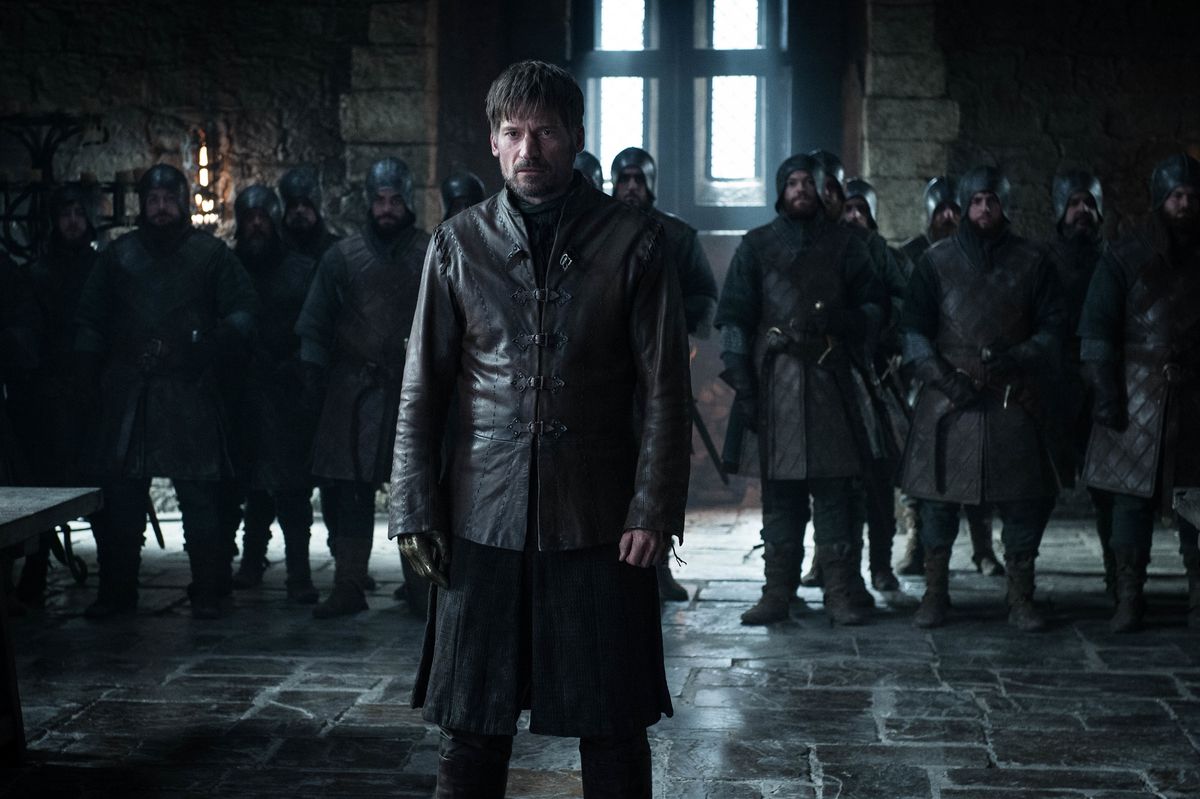 No one really wants Jaime around, but if it’s a matter of allowing him to hang out for a while and help take down some ice zombies or sending him away to rekindle the flame with his sister, Winterfell is going to take what they can get. Jaime will be allowed to fight.  One hand is better than no hands? It’s like the Flobots said in their 2007 hit song — “I can kill White Walkers with one hand, ya huh!” (I refuse to apologize for this.)

Just because they gained another fighter doesn’t mean Daenerys is a happy camper. She reminds Tyrion that if he can’t do what she needs, Daenerys will “find another Hand who can.” Nothing’s going right for the poor Lannisters. Tyrion’s fighting with Daenerys and Jaime’s fighting with, uh, everyone but Brienne, who stands up for him. Between the bickering and Sansa’s ongoing ice-glare feud with Daenerys, it’s a wonder that Winterfell hasn’t already fallen from internal power struggles alone.

Not everyone is out for blood, though. Arya and Gendry, Winterfell’s most popular will-they/ won’t-they couple, are still bonding over weaponry. She needs her secret blade — quickly. Gendry, happy to twiddle his thumbs by making substandard weaponry for the rest of Winterfell, isn’t working fast enough. “You should make mine first,” Arya tells him, picking up one of his other projects. “And make sure it’s stronger than this.” Gendry is concerned about death, but Arya isn’t. “I know death,” she reminds him. “He’s got many faces. I look forward to seeing this one.”

Is anyone else concerned that Arya is just kind of cool with Gendry making subpar swords? Where is his mentor? This is a terrible apprenticeship program. Someone should change up the rules of this internship if any of them survive the war.

Speaking of things we’re looking forward to, Bran and Jaime finally have their face-to-face, one-on-one confrontation. Bran is sitting in the godswood by himself again when Jaime approaches him. (How does Bran keep ending up parked outside in the cold? Why is no one more concerned that Bran, the only one who can see into the future, is constantly disappearing when there is a horde of zombies approaching? This is not the time to be physically losing people just because they have terrible communication skills!)

Jaime apologizes for pushing Bran out of the tower window all those years ago, but Bran says he’s totally good and that Jaime’s murder attempt let Bran go on his vision quest in the first place. When Jaime asks whether Bran could try to return to some state of normalcy after the war (read: “Be less weird, kid”), Bran reminds him that there’s no guarantee of an “after.”  None of this matters anyway! The question at the heart of their conversation is, why didn’t Bran rat Jaime out as an attempted child-killer when he had the chance? All of Winterfell could have watched Drogon smoke Jaime down to finely cooked meat, then chomp on him for a light snack. Bran shrugs that off: “You won’t be able to help us in this fight if I let them murder you first.”

This episode wasn’t all about Jaime, but it was certainly mostly about Jaime. It was a dream for yours truly! Jaime bounced from person to person, moving like a pinball across Winterfell. His conversation with Tyrion about Cersei’s deceptive tactics results in some harsh words of wisdom from the youngest Lannister. “She never fooled you. You always knew exactly what she was. You loved her anyway.”  The brothers even get a chance to joke around with each other, letting Tyrion reference one of the show’s most famous lines: “I always imagined myself dying in my bed, at the age of 80, with a girl’s mouth around my cock.”  It’s adorable! Incredibly juvenile, slightly fan-baiting, and borderline gross, but adorable all the same because the boys are back together.

Jaime then finally makes his way over to Brienne (a quintessential moment for all of you Braime shippers), and, in a moment of trying to be a gentleman, he gets yelled at by the woman he loves! “We’ve never had a conversation this long without you insulting me!” she snaps.

“WE’VE NEVER HAD A CONVERSATION THIS LONG WITHOUT YOU INSULTING ME!”

Insulting conversations are the cornerstone of any good television show: Veep, Real Housewives of Beverly Hills, Paw Patrol, and now, the Daenerys and Sansa Show. The two women have their own heart-to-heart this episode. Dany confides in Sansa that she wishes Tyrion hadn’t trusted Cersei. “You never should have either,” Sansa knowingly replies.  Hmm, turns out insulting Tyrion is not the way into Sansa’s heart. Dany decides to try a different route by addressing the elephant in the room: Dany loves Jon and she wants to know why Sansa has an issue with their love. Sansa doesn’t even know that Jon and Dany are related yet!

For those keeping score at home, that’s 2-0 for Sansa. It’s only when Dany makes a joke about Jon’s height  that the two women kind of hit it off. Things are going so well! Jon can finally rest easy knowing that his sister and his aunt-turned-girlfriend-turned-queen are becoming best friends. That is, until Sansa asks what Dany’s plans for the North are after she claims the Iron Throne.  Ah, well. Not all friendships can last. Even those that just started.

But some friendships do last! Tonight’s episode brought us a beautiful reunion between Sansa and Theon Greyjoy (or, as I keep referring to him, “Lily Allen’s little brother who was once a music video star”). Theon tells Daenerys that both he and his sister Yara have pledged their allegiance to Winterfell, the North, and Dany’s army-at-large.Across the courtyard, more reunions with more friends! Jon and Sam are reunited with Tormund, Edd, and Beric. They waste no time hugging one another, and staring lovingly into each other’s eyes — though Tormund looks around for Brienne, asking, “The big woman still here?”

I love this part of Game of Thrones. It’s pure fan service. It’s the last reunion before the big battle, a chance for longtime fans to see all of their favorites (who are still alive) reunite before they head into battle and die. It’s Tony Stark hugging Bruce Banner or Thor complimenting Steve Rogers in Avengers: Infinity War before Thanos snaps his fingers and kills almost all the superheroes we’ve come to love. That’s this Game of Thrones episode.

Unfortunately, like in Infinity War, there is a giant battle that Winterfell must prepare to fight. In a scene ripped straight out of The Fellowship of the Ring, everyone who matters is gathered around a giant table map. They’re solemn, which is to be expected when you’re preparing for your own death. At this meeting, Theon pledges to guard Bran to make up for his past mistakes — “I took this castle from you. Let me defend you now.”  — and Daenerys tells Tyrion that he can’t fight at all. “Ser Davos is perfectly capable of waving a torch on his own.”  Someone has finally moved Bran inside (again, am I the only one worried about this boy’s health?), and he’s sitting in the corner, serving up premonition after premonition. It’s great fun watching Jon look at his younger brother as he tries to wrap his brain around how strange Bran has become.

Just because death is around the corner doesn’t mean it’s all gloom and doom! Tormund says, “We’re all going to die, but at least we die together.” , and Edd jokes that if Samwell Tarly is their best bet for survival, “We really are fucked.”  It’s important to find the lighthearted moments in the hours before death. Have a cup of tea, play a game of Chutes and Ladders, or, if you’re like our collective partiers, drink until you can’t remember your name or the fact that a horde of seemingly unstoppable zombies is just a couple of horse-trots away from seizing the castle.

It’s a good thing Jorah has this sword because the episode ends with the White Walkers arriving at Winterfell. This is it, lads. The big one. The five Ws: Westeros’ White Walker World War. I’m sure showrunners David Benioff and D.B. Weiss will work extra hard to make up for this spectacular hour without any on-screen deaths. Prepare to lose some of your characters next week! And get amped up to see some of our favorites kick White Walker ass. War has finally arrived.

You may have missed

Its Arya… Who Kills the Night King.. Game of thrones season 8 episode 3.

GAME OF GAME OF THRONES: SEASON 8, EPISODE 2, A KNIGHT OF THE SEVEN KINGDOMS

Who will rule the Game of thrones? Artificial intelligence predicts the King…

Student of the year 2: Trailer released, best of memes are here..

The Beginning of the End: GoT Season 8 Premieres on 14th April 2019